I’ve long been a lover of carbon. I admit it.. during my TriGeek days I hadd a huge heart- on for the veneble Zipp 2001.. what a sleek and seksay ride that was and I would do almost anything (still) to get it. 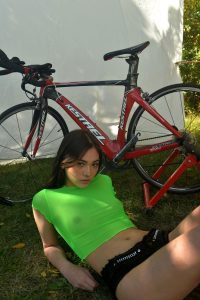 But, I also had a massive heart- on for Kestrel. Loved their bikes and their ethos- single piece frames not glued together or lugged. It was what set them apart, in my humble opinion, and endeared them to me. So, a few years ago I found a cool Kestrel Talon Tri on sale. It was late 2010 and my daughter wasn’t even a twinkle in our eyes.. well, *almost* a twinkle as she started her growth charting that December.

At any rate- the bike was a great deal. I can’t remember the price but we had it and I dropped it on the eBay purchase.. being a former bike mechanic and well acquainted with bike stuff.. I was confident I could set it up myself so having it shipped in the Manufacturers shipping box (and condition) wasn’t a big deal to me at all. And the

When it arrived.. I was beside myself. I had it shipped to my wife’s work as they were available 7D/wk and me.. I was a commercial painter working to try and launch my own company. So I was ALL OVER the lower mainland (Vancouver BC area.. I worked from the British Properties (owned by the Guiness corporation.. yeah, the beer company) all the way to White Rock and I would ride pretty much to any and all site. Unless the boss said not to. Which he hardly ever said.

Unboxing (sorry, no “unboxing” video.. since it’s been a few years) was wonderful.. and putting her together enough to ride her home was fun. And then tuning her and dialling her all in.. it was great.

The most notable ride I had with her was this one day.. I was working on my own contract over on the North Shore and we had had a “scare” .. you know- pregnancy has started and growth is taking place and then.. a scare. Many reasons could have been.. so we decided an early ultrasound to test the waters and see what the scare was… and the office was waaay out in East Van on Victoria Dr. past Kingsway.. so I decided to ride the Kestrel for speed. It being way faster than my wife’s Kona Cindercone.. commuter friendly speed, not.

It was raining as I left the apartment tower in North Van.. and as I spun across the Lion’s Gate Bridge.. the rain started to get a bit thicker. By the time I was passing Science World it had turned to sleet with a bit of stick to it.

By the time I reached Nanaimo Station (approx.) I was front- covered in white and the roads, although they were wet, were tinted with whiteness along the edges.. and my glasses were spotted with crusties (dirt/ debris).

By the time I reached the office I was a posickle.. and my wife went in to the appointment solo letting me “warm up” and drip- dry out in the antechamber.

Result of the ultrasound: 75% certain we were having a Sabina and 100% certain nothing bad had happened. We were, still, gonna wait a bit to announce.. so we decided to wait till ultrasound #2 and the certainty of the Sabina/ Orion debate (if we were having a girl, her name would be Sabina.. a boy= Orion). 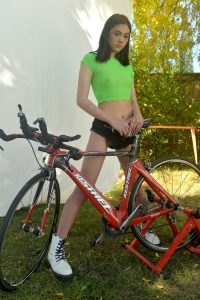 My conclusion? The bike handled super nice.. a lot faster than the Kona I was riding most of the time (dhuh!). But it wasn’t until we were living in Black Mountain (Okanagan) that I really got to push the Kestrel..

I had this training route I’d do.. leave the house, spin (well, coast) down Hwy 33 to some church or other and then dart off in to the orchards and just do a big circuit. It was about 2 oe 3K around the course and I tried to do as many circuits as possible. But, I was also able to ride other bikes and compare.

The kestrel was a kinda flat ride. It didn’t really have Pick Up.. no “get up and go” that the birthname pedigree was known for. I rode with a friend once who was on a 200SL and he was telling me it was a whippy and snappy ride. The 2011 Talon was.. kinda flat. Kinda like a homebrew beer that’s been on the table a bit too long. She didn’t have the pick up I thought she’d have and tracking was really nothing to write home about. I loved the carbon ride characteristics and her cornering was heart stopping but the rest of the ride was kinda flat.

Later on, I took out my wife’s Felt S22- Alu tri geometry framed 650c’d bike.. and that was whippy and snappy and had pick up to light ur arse on fire so, I know that the pick- up issue wasn’t due to tired legs it was due to chain stay length… I mean, I remember riding an old Gary Fisher CR-7.. a bike that could WHEELIE on a dime and had uber short chainstays (in comparison, obvie). Same with my “Team Chance” (not a real Chris Chance.. but a Taiwanese made “nock off” or mass produced version similar there to and with similar branding).. loved (and miss to this day) my Team Chance… those where whippy and snappy bikes.

But, I gotta say- the Kestrel looks svelte when it’s parked
And I prefer riding it on my trackstand training for Circumnavigation.

Would I take her along with me around the world? Probably not. If I don’t get sponsored for that aspect I’ll be taking my wife’s Felt S22.. I love that ride and would as a 650c wheeled bike it’ll be a bit easier to pack in to a small watertight bike box (that I gotta build).

Is the bike worth the $1000 US I paid for it? Probably…. not. The angles and measurements of the frame are far too generic. It’s not a “triathlon” bike- it’s a road bike that has aero bars/ clip on’s added. The saddle is, also, nothing to bring to a race. I toured on a Flite Carbon Evo Ti (carbon shell on Ti rails) and raced on it too.. this saddle makes my arse numb. And it’s VINYL.. maybe I’m old school but I figure a bike saddle needs to be leather. It doesn’t have to be a Brooks leather saddle but the Flite Ti with leather upper is ideal. And on a carbon frame, IMHO- Ti Railes are a must. Oh- wait… it’s Alu that Ti Rails are a must. Sorry (it’s been awhile since I did any purging of personal info and impressons on cycling).

Would I recommend this bike? Probably. It’s a good entry level street bike. If you don’t really know what you want then go for this. I’d defo suggest this over a ROSS or soemthing like that.

**This is the first experiment in to writing a sort of article and including a photo gallery. I’ll be seeing if I can “massage” the layout a bit once it’s published. Thanks for bearing with me** 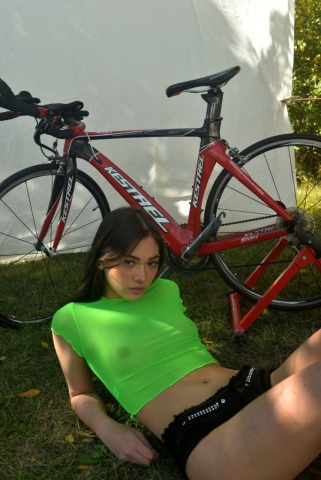 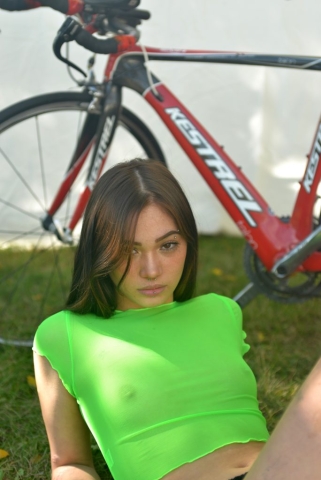 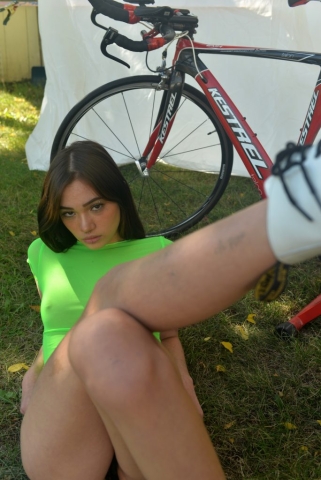 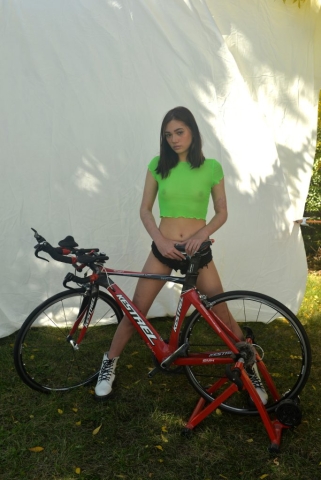 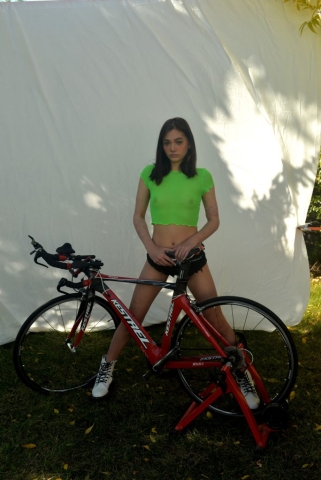 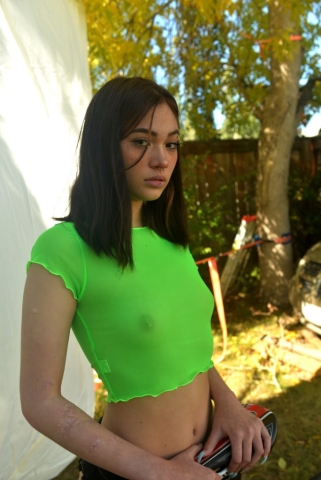 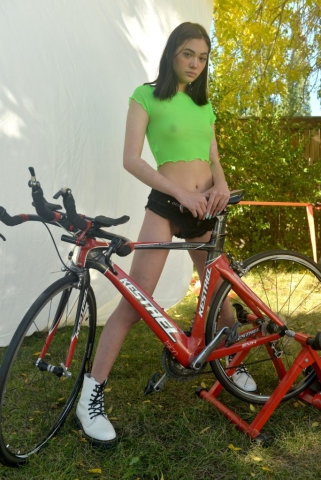 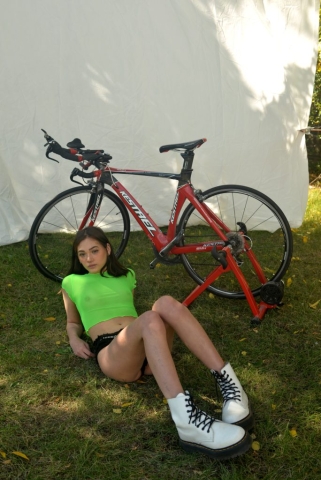 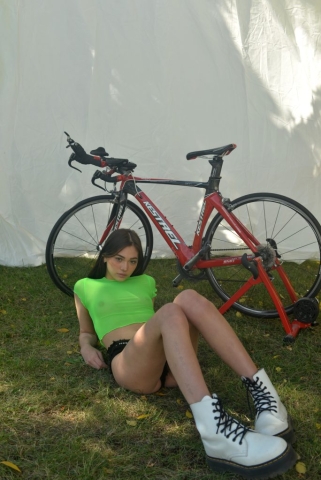